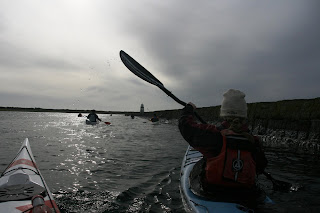 Derbyhaven is one of the few very protected locations for paddling in certain wind directions, with a horseshoe shaped bay facing NE and a low marooned breakwater providing shelter from seas not already shielded by land. This whole inlet is nestled in behind the long arm of Langness, a rocky peninsular jutting out into the strong tidal stream on the South coast of the Island. Providing a paradoxical contrast of calm and control, exhilaration and horrification (amongst other experiences for kayakers), all within a short distance from shore, this location is to be approached with caution and experience.
We scheduled the improvers and intromediate sessions to coincide with the last few hours of the flood tide, ensuring a safe and sheltered working area in Derby 'Haven' with the option of a foray along the intriguing coastline of rock formations and fossils, inlets and channels, to the East of Langness... It was the ideal opportunity for discovery learning with use of skegs and edge control, imput from the 'beach whiteboard' during the break, culminating in some impressive results by the end. 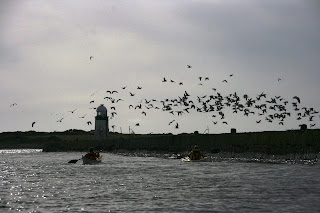 The Intermediate / Advanced group headed out round Fort Island, after a brief decisive chat, on route for Dreswick Point! Timed nicely for close observation of Langness running on max spring tides, (against the wind) the plan was to follow the ebbing stream, then break out round Langness point into Castletown Bay. The lighthouse (now the home of Island resident and well known motorsport fanatic Jeremy Clarkson) provided the perfect backdrop for pre-tidal race brief, and the last point before committing entirely to the adventure. With everyone fully alert, decks clean of clutter, off we paddled...

We pulled into Castletown bay some time later, with the look of exhillaration and satisfaction beaming from everyones faces, a very enjoyable trip and some tasty cake to top it off. Sorry for the lack of pics :)
Posted by Keirron at 9:39 am No comments: 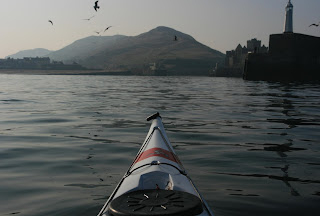 Just back from the CanoeExpo show in Coventry, great to catch up with everyone who attended and see some of the new kit coming out this season! 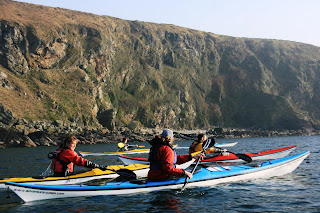 A few pics from Sunday's paddles led by Janet out from Fenella Beach, Peel

(taken by Sam and John), conditions were exceptional! 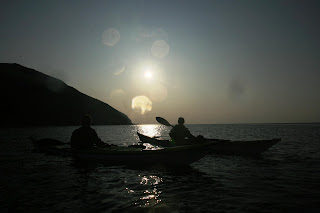 To quote from the staff
"What a great day! Crisp, gorgeous day and everything went like clockwork"
Not much more to add!
Over the weekend, the cheery plum blossom has appeared, 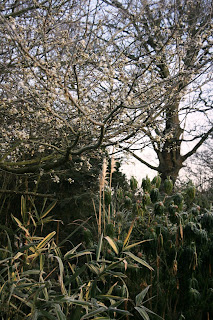 glistening with the morning frost. Sure sign of spring on the way..
Posted by Keirron at 7:47 am No comments:

the Sunny side of life... 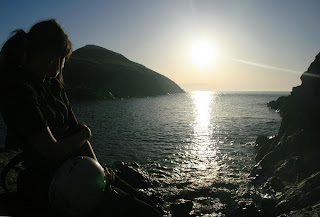 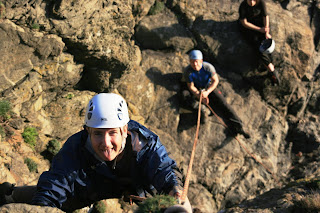 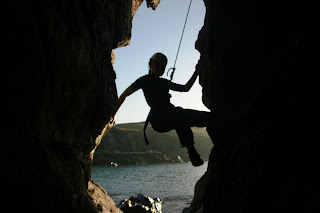 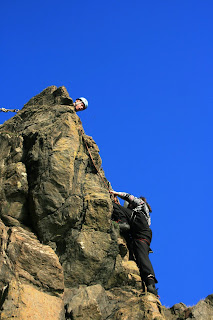 Posted by Keirron at 7:50 am No comments: 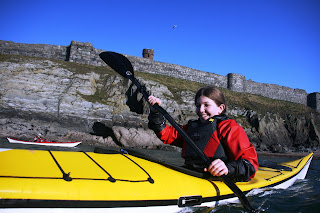 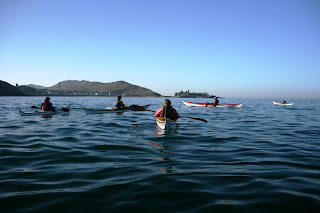 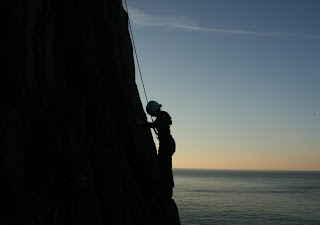 As the fabulous February 'high' kicks in, its hard to believe its 'winter time' on the Isle of Man. 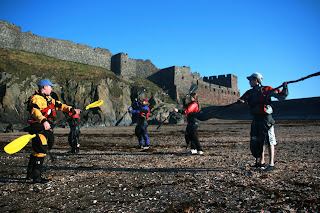 I remember it was spans of two and three weeks like this, during the winter season when I first began seriously committing to sea kayaking, and it obviously had a luring effect... 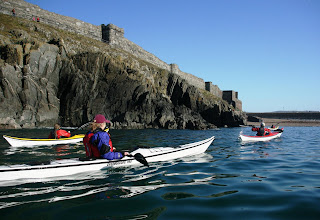 A few pics from the sessions we've enjoyed immensely, Kittiwakes were particularly abundant off Peel today, and occasional seals which stayed in close proximity to the fishermen reeling in their shiny catch up to the breakwater. 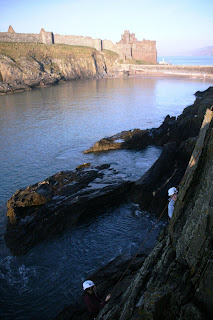 'Half Term' & the Guillemots are here already... 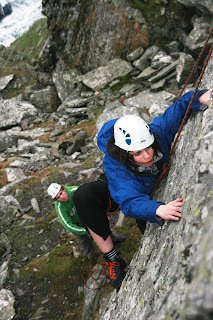 Not only have we just had a fantastic weekend of activities and calm weather, the current high presure system is due to hold for the rest of the half term holidays! Saturday's rock climbing session at the Chasms took place on 'Tower Slabs', 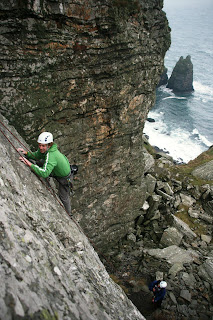 with continued improvement in movement on the rock. Climbing sessions for beginners and kids will also be running in the afternoons during the week over the school holiday period, (family sea kayaking sessions in the mornings) predominantly at Peel, contact us if you fancy it. 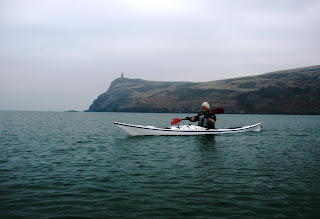 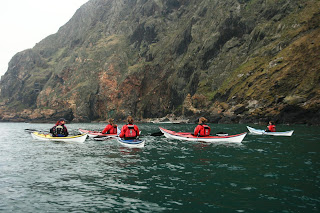 and rock hopping along the Island's rugged coastline. The 'Introduction' and 'Improvers' groups both headed around Bradda Head, through the sea arch and past the old mining buildings, with the more experienced group reaching Fleshwick Bay and the nearby caves and resident seals... Whilst Fulmars a plenty around the mines area put on an aerial display, and occasional seals popped up and dived, the beginners took an 'on the water' break before returning to the beach, just ahead of the improvers, everyone feeling like they had earned the traditional ice cream... 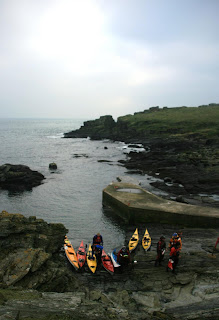 The Intermediate / Advanced crew from the Adventure Club headed South, through the Sound running witha spring tide, to our favourite spot for hot chocolate and cakes at South Harbour, on the Calf. Guillemots are already here for this years nesting, creating contrasting black and white rows of feathers on the rock shelves above us, as we paddled past. 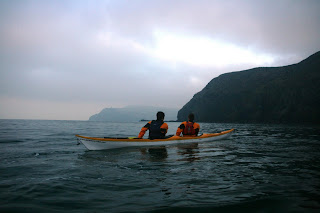 John and Sam had decided to give the Mighty Triton a blast, displaying some well timed rolls and surfing, all part of their preparation for putting in a lightening fast time around the Island this spring :)
Posted by Keirron at 10:03 am No comments: 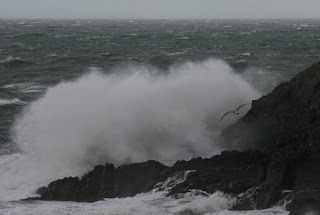 Even to those who know our Island well, it is the constant changes (many of them very subtle) which make living here so fascinating and fresh. Stormy weather and rain arrived as predicted, emerging as a NW gale and producing some exciting surf conditions at Peel. Both the sandy main beach and Fenella are subject to many environmental factors affecting water quality and wave formation. With constant work continuing on the water retention scheme and work scheduled to begin on the new marina in March it will be interesting to see how these new changes will impact marine life and water users in the near future. 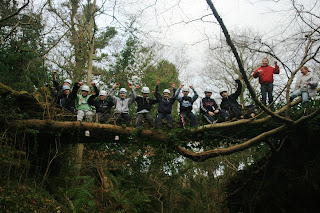 Saturday gave a welcome reprive from the wind and rain, and Kim's 'Young Adventurers' Birthday party made full use of mild conditions! 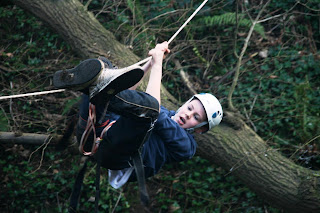 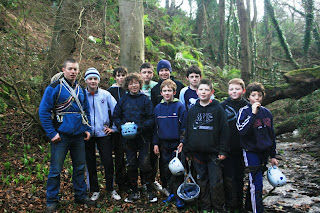 Zip-lines, team games and an enthusiastic group guaranteed a muddy yet thrilling experience.

Sunday saw the first 'Introduction to Sea Kayaking' of 2008 begin, with an indoor Tides, Charts and Trip Planning theory session at Adventurous Experiences base, plenty of tea, coffee and chocolate cake to ensure maximum information retention...
The Intermediates headed to Gansey Bay, where the due South gales had produced a constant stream of rollers, and a very productive session ensued. 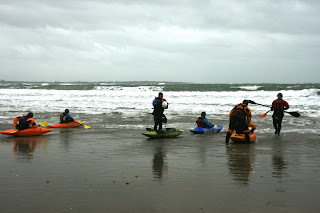 (Photo by Terry Bugg) What a tremendous weekend, and the forecast for next weekend and the following week days (half term) is excellent, so fingers crossed for dry conditions for Climbing and calm seas for the many sea kayak trips we have planned :)
Posted by Keirron at 6:38 am 1 comment: