The 'Freedom to Flourish'...

Firstly a quote from the Hen Party who booked for a Coasteering session with us on Saturday and due to adverse weather swapped to a Gorge Scrambling session... and absolutely loved it!

"Dear Keirron
I just wanted to drop you a line to thank you so much for Saturday morning - we had such an amazing time. Special thanks to Sam and Lauren...
... the two of them were absolutely fantastic, I can't speak highly enough about the confidence they installed in the girls and their friendly and welcoming personalities. I would absolutely remmmend this to anyone - we are hoping to have another trip for the coasteering so i'll stay in touch...
Jo" 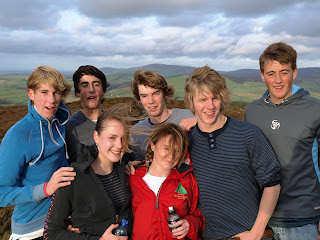 Its been a whirlwind a few weeks, in which there have been many new and exciting changes. Pictured here - the team on the Youth Scholarship Program who are confirmed for the Norway 2009 Expedition. (taken whilst on Hill Navigation training session on the Island).

A group of us completed our Open Water PADI Award - scuba diving with Mann Scuba Divers based in Port Erin, (one of the deals available through the adventure club) and whilst out in Cancun for Phil and Clare's wedding, also got a few dives in. Swimming amongst the coral reefs with a Nurse Shark, Morray Eels, Stingrays, Barracuda and numerous other species of fish! It was amazing :)
A very memorable holiday, and i'm very lucky and proud to have to such excellent staff to run sessions in my absence, and obviously upkeep our reputation of providing Safe, Fun, Learning experiences on the Isle of Man. 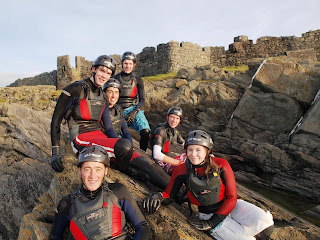 (As customer feedback shows!)
The BBC were out with us today, for a quick interview and following our Youth Scholarship Team on a Coasteering session around Peel Castle. Great to be back in Manx waters again after a week away!
And as I had some freetime on the plane, I put a few of my thoughts down on paper regarding 'Freedom to Flourish' on the Isle of Man.
The theme ‘freedom to flourish’ runs through the current advertising campaign, featuring the ‘Island Lives’ of those who live and work here. The professionally produced television advertisements join local people in their regular day, bringing to the public eye glimpses of how their passions and lifestyle choices are both supported and encouraged. How this positive attitude provides the catalyst for happy wholesome pursuits, and the environment in which many talented achievers have blossomed.
One of the flavours (for many the main ingredient) to island life is the accessibility to the outdoors; part of ‘everyday life’ with choice to encompass every taste. The Island is rightly proud of the accomplished sports people, entrepreneurs and enthusiasts who have utilised this freedom to flourish. The lifestyle choices made by such people are reflected in their success, their employment and their home.
Freedom involves countless choices, including the freedom to take risks; because the biggest risk in life is not to risk. I am a great believer of the mantra “It is certain that we will not live forever, but not all of us really live”! Adapted from Mel Gibson’s phrase in Braveheart.
Risk is the possibility that something may happen which we do not intend. When decision making (in every aspect of life) we weigh up the pro’s and cons and select the option which will bring us our intended result. We are in fact conducting risk assessment, using processes as simple or complex as the decision maker wishes.
Some take more risks, some choose less, and characters, education, achievement, enjoyment and the resulting lifestyle are the product of this. Different cultures, previous experiences and situations can sway the process, but the individual is ultimately responsible for his or her decision. Individuals decide whether they live life to the full, get by or merely exist – taking no risks, losing nothing. Gaining nothing!
Taking risks need not be irresponsible, or involve money, possessions or physical harm. To take risk is to try to achieve what is not certain. To step out of your comfort zone and possibly not reach the intended goal. “It is the journey, not the destination which is important.” Adapted from a quote by Arthur Robert Ashe, Jr.
There are those with natural talent and drive, to push themselves to their utmost limits and beyond the limits others feel comfortable with. It is a fine line between someone at the top of their game, pushing boundaries and taking ‘risks’; and someone well outside of their ability level, displaying an irresponsible attitude and providing a poor role model. Which side of the line often depends upon the attitudes of those taking the risks, and the perceptions of those not taking part.
The Isle of Man is the perfect adventure playground for those wishing to partake and excel in outdoor pursuits whether gentile strolling or adrenaline pumping extreme sports, and everything in between. The role of the outdoor education provider is to ensure a safe, fun learning experience and reduce the real risk as much as practically possible. These are constantly assessed and reduced to feelings of exhilaration, apprehension or fear of the unknown, and coping with these emotions (aspects of operating outside of personal comfort zones) in an unfamiliar environment. Certain inherent perceived risks remain which are integral to the activity. These heighten the senses, ensuring the journey is an unforgettable adventurous experience!
The long term objective of the instructor or coach is to allow those, under guidance, to develop independence of tuition, at their own pace. Achieved by having the skill to effectively ‘read’ people, make decisions, inspire confidence, pass on knowledge and awareness, and carefully balance nurturing and persuading, leadership and consideration. Ultimately it is the skill of bringing responsible decision making processes (risk assessment) out in others. To teach and build the qualities of team work and leadership in students, with the emphasis on gaining experience in an environment suited to the students’ ability and learning style. The instructor has the participant as their primary focus.
Those pushing their own personal limits do this without the responsibility of coaching or leading others at the same time, and so can operate at an ‘extreme’ level. This may include increased perceived and real risk, and that individual has the freedom of choice to do so frequently resulting in the individual’s ability to flourish.
Keirron Tastagh
Posted by Keirron at 7:31 pm No comments:

A stunning pic by Jenny (an Adventure Club member for some time now) from one of her recent expeditions... Not many of these on the Isle of Man despite numerous sightings, especially when the Guillimots are here in large numbers! 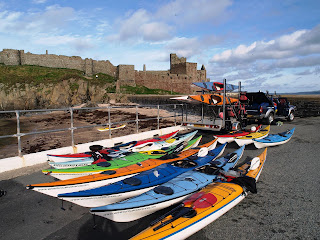 Peel was our put in for Sunday's paddles, with the October Introduction to Sea Kayaking kicking off, as well as different levels of trips and Adventure Club training sessions.

Some swell was still running from the previous few days of wind, and this made paddling close to the cliffs an interesting experience! 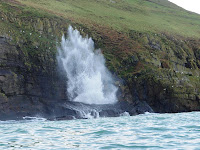 Further out was quite flat, 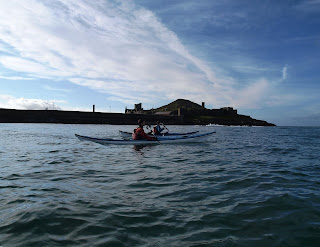 especially heading North, and the groups who paddled South 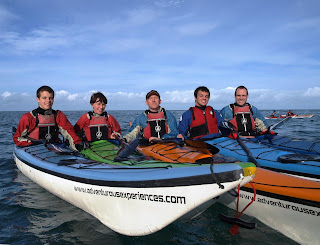 found some conditions off Contrary Head, on the way to Glenmaye Beach. 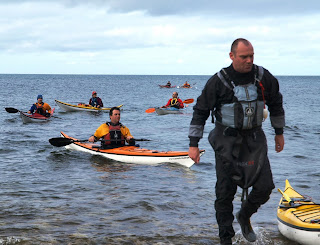 Congratulations to Martin Dycher, Sarah Creer and Lauren Roberts on completing the new BCU 3* Sea, as well as those working towards the generic 2* Award, or have just had their first session on the 'Intro' course with us. 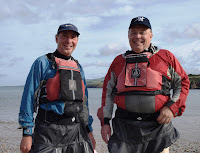 ***VERY EXCITING***
Those who have not seen the TV clips from new Isle of Man Tourism Marketing campaign, we have the full length one (featuring Adventurous Experiences) on the main website front page for the moment; http://www.adventurousexperiences.com/


You may also have noticed the addition of a few updates - including the profile for Lauren Roberts who officially joined our staffing team recently.

Our Youth Scholarship Program has moved into the concentrated coaching stage, with the seven person team training in both the indoor pool and on the water, as well as in depth route and location planning, fund raising and completing the second year of full time study of their A'Levels!
Posted by Keirron at 3:00 am No comments: