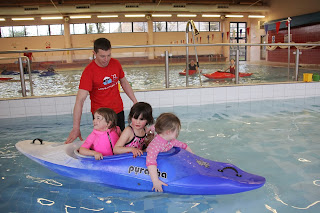 This afternoon was the final session in the Xmas Break - Kids Indoor Kayak course. 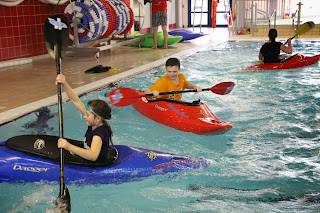 Western Swimming Pool, Peel is a fantastic facility with a friendly team of lifeguards and staff. 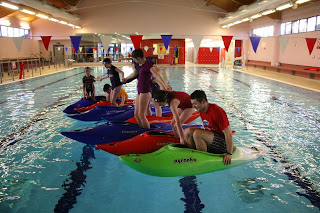 The whole atmosphere is very positive, and this makes the sessions really productive, when combined with plenty of fun and excitement, and most importantly, ACTIVITY! 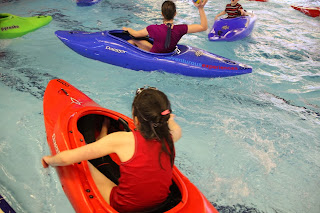 A few of the very young adventurers wanted their first experience in a kayak as well : ) 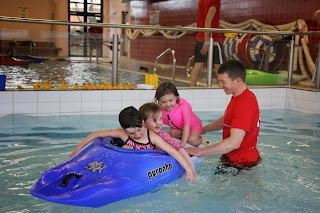 Happy to oblige!! I know we'll be seeing you all again soon : )

We're looking at developing a permanent slot on a Saturday afternoon for kids indoor kayak training at Peel Pool, provisionally blocks of 4 sessions. Please contact me if your interested.
K

Posted by Keirron at 5:32 pm No comments: 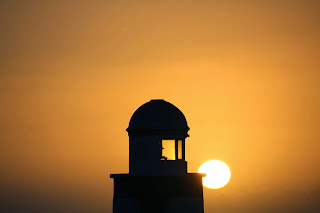 Calm sunny conditions and seals bobbing around near the kayaks as we ate Katia's freshly baked flapjack... 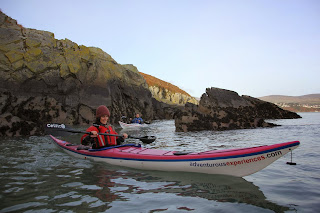 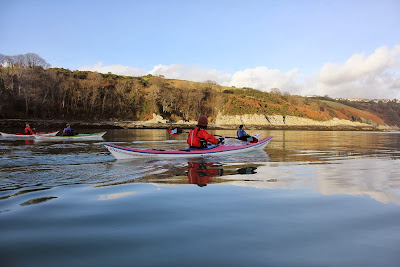 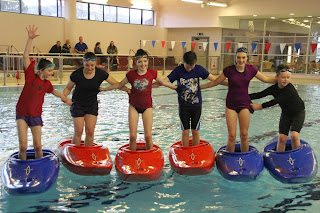 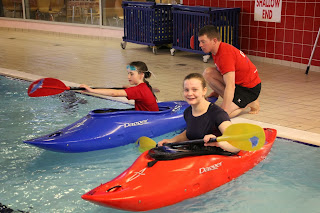 Working in more challenging and progressive skills, games and getting wet!! 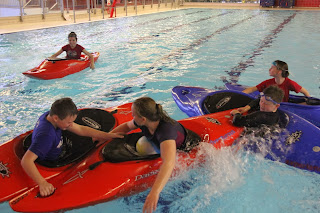 Another delightful day in and on the water - here's to many more : )
Keirron

Posted by Keirron at 4:06 pm No comments:

I was up this morning, whilst the stars were still bright,
checking my camera and gauging the light... 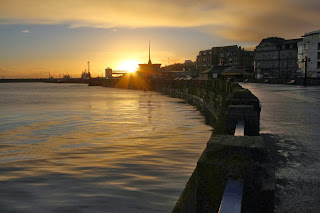 ...for sunrise was coming, and i'd a location to choose,
from Douglas prom and its coffee, and a different aspect to muse... 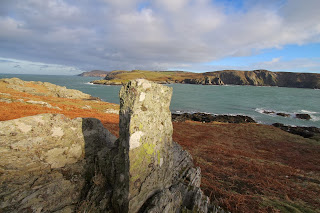 ...to the Calf of Man island, with spectacular views... 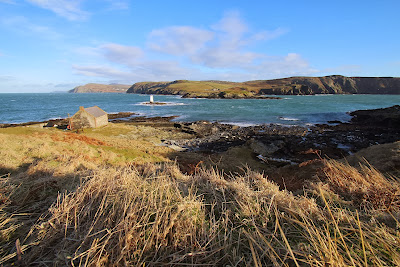 I decided on both, before I headed to 'work', masses of wildlife, with tranquillity a perk : ) 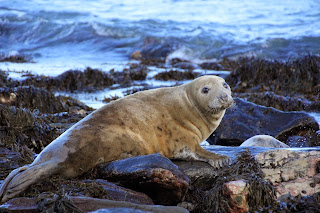 Seals in abundance, laid out in the sun, stranded by the ebbing tide, any noise and they'd 'run'!

So I practised the stealth approach, slipping quietly through, the rushing tide at the Sound, downwind of the 'crew'.
In my bright orange jacket, and yellow kayak to boot, it was a miracle they dozed, as I continued the shoot!


Then over to Peel, where the kids training course is run,
their second day in the pool, with splashing and fun!! 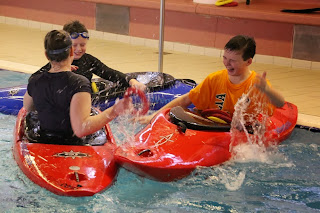 all sorts of manoeuvres, with skills part of the mix, developing their kinesphere as well as some tricks.

Rescues and races, paddles and hands, solo and team tasks, water and land. 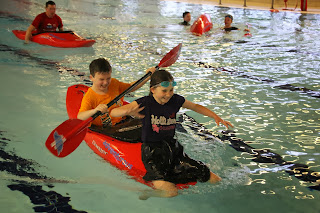 Bring on tomorrow, more sun so i'm told, combining outdoors and indoors, avoiding the cold.
Opportunity for all folk, to learn a new sport, be active, be healthy, and generally outdoors!! 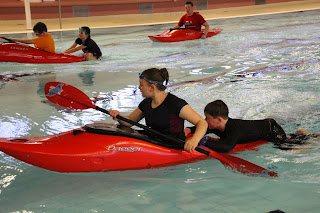 Posted by Keirron at 5:56 pm No comments:

Students on our continuous Youth Scholarship Development & Leadership Program, are gearing up for their three week self-sufficient expedition to Vancouver Island next summer, sea kayaking and mountain walking.

The team met up for an interview with Paul Moulton from MTTV during a training session, and the video went live today.


"As our main community project, we support and fund the entire Youth Scholarship - Development and Leadership Program, enabling young students from the Isle of Man to rise to the challenge and be part of a team embarking on a once in a lifetime experience! Further structured progression is then offered to give trainees a pathway to a career in Outdoor education."

See you on session TR. 31 in the new year.
All the best
Keirron
Posted by Keirron at 7:11 pm No comments: 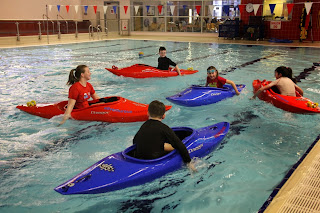 We kicked off the first kayak indoor pool course exclusively for kids today, with a guide age of 10-14yrs.
Perfect timing, as playing out would be deemed challenging ...

Designed to be based almost entirely around learning through games, the young adventurers on this course were keen and quick learners, so the session developed onto core skills for the second part of the hour. 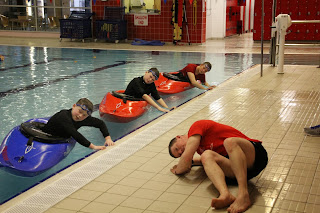 Learning how to capsize, swim their boat to the side, correctly and safely empty and also get back in in deep water : )
Plus a whole lot of fun with learning to move their kayaks in different ways, using some team games to add an element of competition to the learning...
I'm looking forward to the next 3 days and seeing how skills come on : ) 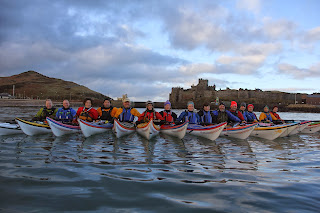 A few pics from yesterday's sea kayak trip, north of Peel, on a sheltered calm sea : ) 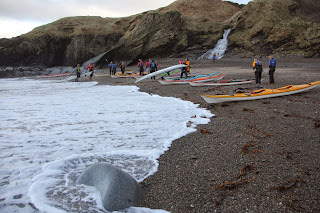 with opportunity for a couple of surf landings if well timed, and plenty of catch up time with Club members 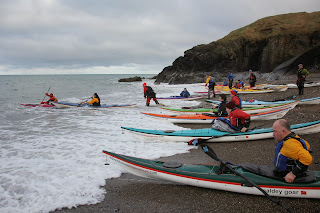 Really good to see Olly and the lads out on the water, and it looks like we'll be running some more adventures for you shortly! 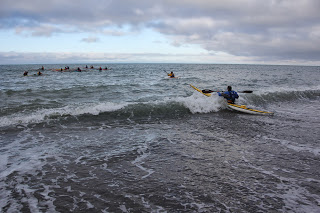 All the best
K

ps. session for sea kayaking this Sunday and the New Year's Day Adventure Club paddle are on the website Calendar!

Posted by Keirron at 4:16 pm No comments:

Merry Christmas to Everyone, from the Team at Adventurous Experiences : ) 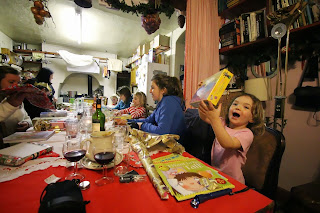 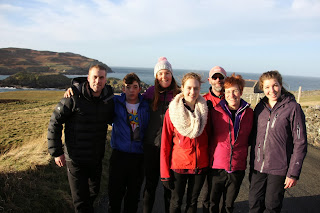 Stunning walk this morning from Port St Mary to the Calf Sound, along the coastal footpath. 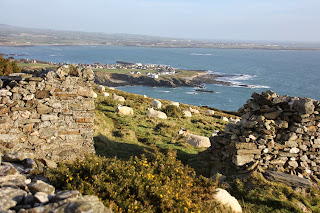 The late afternoon Christmas tea, with a orange glow of a sunset, followed by Xmas Pud!!

Posted by Keirron at 7:05 pm No comments: